Tomoko Saeki (佐伯倫子 さえきともこ) is a classmate (1-C) of Junta. She is considered the most beautiful and popular girl in Fukoma High school and her peerless beauty earned her the title Miss Fukoma. She is the girlfriend of Ryuuji Sugashita, at least until she meets up with Junta's Mega-Playboy side. Her insistence at getting Junta, even when he shows no interest, infuriates Ryuuji into taking revenge. After an epic fight between Junta and Ryuuji at Ryuuji's mansion, Tomoko chooses to stay with Ryuuji at the end.

Tomoko was featured and also made hugely popular by a fan-made dating sim game called Simgirls, which played over 60 million times worldwide.

Tomoko stands significantly taller than all the other main female characters in the series. She has a perfect well-proportioned figure with sumptuous natural breasts, perky buxom buttock and long straight legs. She has long and wavy dark brown hair that extends past her shoulders, dark brown eyes with long, voluminous eyelashes and fair skin.

According to DNA2 promotional material on Weekly Shōnen Jump (no.36-37,1993), it stated that Tomoko is the No.1 beautiful girl in Fukoma High.

Tomoko is a very complex girl. At first glance, she appears to be aggressive, spoiled, and used to having her own way. She can also act a bit arrogant and cruel, teasing and fooling Junta at the beginning of the series. She is quite confident in her unmatched beauty, thinking she can capture Junta's heart even after he told her he is seeing someone else.

It was later revealed the reason for Tomoko's personality was caused by relationship problems with her boyfriend and her father. Ryuuji was cheating on her constantly and her father was often away from home because of work. She told Junta that she felt very lonely.

Despite being very playful and flirtatious with Junta at the early part of the story, Tomoko is very serious and conservative about romantic relationship deep down. It was revealed that her boyfriend Ryuuji had never kiss or even touch her hand in the past. When Ryuuji transformed into Junta and entered her home, she eagerly asked him if he was serious about their relationship.

Tomoko is also rather kind and compassionate towards others. During the final showdown between Junta and Ryuuji at Ryuuji's mansion, she showed deep concerns for the safety and well-beings of Ryuuji as well as his other 'ex-girlfriends'.

At the end of the fight, despite once being deeply attracted to the Mega-playboys' charisma and appearance, Tomoko did not hesitate and chose to stay with and take care of the defeated and youth deprived Ryuuji. It was a clear sign that Tomoko was a girl with a pure heart and true love.

This scene is the most discussed and loved scene in the series. There are significant differences between the Manga version and the Anime version.

In the original Manga version, Junta wanted to buy a necklace for Karin at the department store Grand Gorgeous 21. Tomoko was fooled by Karin and thought that Junta was planning to give her the necklace. Tomoko took Junta into a fitting room when he tried to ask her to return the necklace. When a staff was checking inside the fitting room Tomoko hid Junta behind her butt. Junta puked and spoiled her panties.

Tomoko asked Junta to take her to a restaurant called Sea Zone as a compensation. When Junta finally summoned the courage to ask her to return the necklace again, Tomoko agreed to give him the necklace only when he could correctly guess the color of the panties that she was wearing. Since the panties she wore in the fitting room was spoiled Junta answered that she was not wearing anything. Tomoko asked Junta to look under the table to find out the answer himself. The event was disrupted by three thugs hired by Ryuuji.

After being caught by one of the thugs, Tomoko's skirt was lifted, revealing that she was wearing hot pants. Later on Tomoko was being stripped in front of all the patrons and workers in the restaurant and the thug said it was a service to the public. When her tank top was being pulled up, Ryuuji expressed that being able to watch Tomoko's breasts was a luck. Tomoko once told Junta that she would only show her nude body to her marriage partner, and her face turned bright red when the tank top was rolled up by a thug and her hot pants were unzipped. She cried with tears. When the hot pants were finally unbuttoned and lowered, she screamed that she was not wearing anything inside. She had her breasts exposed for a brief moment and her hot pants was unzipped and unbuttoned with no panties, but in the end she didn't get naked because the strip show was disrupted by Ami and Karin. Finally Tomoko was saved by Junta, who turned into the perfect form of Mega-playboy.

Some of the reasons why this scene is popular among fans are:

In the very first scene of the series, Junta ran into Tomoko on the street on the last day of the summer holiday. Tomoko invited him to her home and asked him to wait for her to take a shower.

On his way to class, Junta found Tomoko arguing with Ryuuji.

Tomoko invited Junta to her home once again. Upon arrival he was welcomed by Tomoko in sexy leotard, who had been doing stretching exercise on the floor.

Deeply attracted by the Mega-playboy charisma, Tomoko confessed to Junta at school.

Tomoko seduced Junta and dragged him into the fitting room.

During dinner, Tomoko asked Junta to guess the color of her panties. Later on she was striped by three thugs hired by Ryuuji in front of a big crowd.

Tomoko met Ami at school and told Ami that she would not give up on Junta.

Tomoko gave her first kiss to a delusional Junta, thinking she was Karin Aoi instead.

Tomoko saw another copy of her (Ryuuji's transformation) in school's medical room.

Tomoko in pajamas was about to sleep when she found Junta (disguised by Ryuuji) waiting for her in the bedroom.

Tomoko was kidnapped by Ryuuji's subordinates in front of her apartment.

Tomoko arrived at Ryuuji's Mansion with her hands tied at her back.

Tomoko was tied to a chair and forced to watch the fight between Ryuuji and Junta.

Karin briefly explained the situation to Tomoko at the underground facility.

When Junta and Karin visited Ryuuji at the hospital, Tomoko explained Ryuuji's latest conditions to them.

While the character design in the anime is mostly faithful to the original manga, the art quality fluctuates a lot causing Tomoko's facial features to change from episode to episode.

A few scenes in the Anime are quite different from the original Manga. The order of the scenes are also re-organized in the Anime.

For example in the manga Tomoko in tank top and shorts was assaulted by Ryuuji's thugs in Sea Zone restaurant; in the anime she was wearing school uniform with white underwear and the event was happened in K2R cafe instead.

As another example, after seducing Junta inside the fitting room Tomoko asked Junta to take her to his home instead of going to dine at the Sea Zone restaurant. Tomoko was wearing an outfit that was seen only in the very first scene first panel of the manga, when she met Junta on the street.

As a supporting character of the original series, Tomoko is well-received by the Doujinshi community. She is the main girl and hailed as the H-goddess in a popular fan-made dating sim game Simgirls, which is played over 60 million times worldwide. Among all the cute and popular female characters in Masakazu Katsura's works, Tomoko is also by far the most discussed in a Japanese forum topic 桂正和 総合スレッド (Masakazu Katsura General Thread). The scene where she was being striped by three thugs hired by Ryuuji at the Sea Zone restaurant also received tremendous amount of loves from passionate fans. 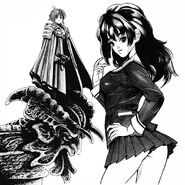 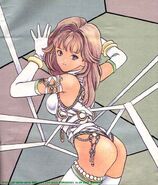 A poster for DNA2 featuring Tomoko Saeki in green swimsuit. 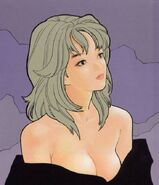 Tomoko Saeki is arguably the most luscious girl among all Masakazu Katsura's works!

When Junta Momonari first turned into the Mega-playboy, Tomoko Saeki is stunned while showing off her peerless voluptuous body curves.

Tomoko Saeki in red hair and a new outfit is manipulated like a puppet doll by Karin Aoi.

A promo for DNA2. It reads "The No.1 beautiful girl in school, Tomoko starts attacking Junta that has female allergy. What will Karin do at that time?" It confirmed that even as a 1st year student Tomoko Saeki's beauty is unparalleled in Fukoma High.

Community content is available under CC-BY-SA unless otherwise noted.
Advertisement